Elizabeth Greenspan writes about cities, politics, and design. Her articles and reviews have appeared in The New Yorker, Architect, Bloomberg Businessweek, The Boston Globe, The New Republic, and Places Journal, among others. She is the author of Battle for Ground Zero, about the politics of commerce and commemoration at the World Trade Center site, published in 2013 by St. Martin’s Press. She lives in Philadelphia, where she teaches urban studies and creative writing at the University of Pennsylvania.

Liz has appeared on numerous radio and television programs, including NPR’s Here and Now, All Things Considered, and On Point; PRI’s The World; WNYC’s Leonard Lopate Show; and CSPAN’s BookTV. She speaks regularly about cities to a range of audiences and holds a PhD in anthropology and urban studies from the University of Pennsylvania.

“Are Micro-Apartments a Good Solution to the Affordable Housing Crisis?” (The New Yorker)

“The New Must-Have for Luxury Buildings: Graffiti” (The New Yorker)

“A Whole Foods Grows in Brooklyn” (The New Yorker)

“How to Manhattanize a City” (The New Yorker)

“The Beginning of America’s Most Fought-Over Public Space” (Salon)

“A Tradition of Conflict and Controversy at Ground Zero” (The Atlantic)

“A Dream of Homeownership, Undermined” (The New Republic)

“It’s a New Day in the Gayborhood” (The New Yorker)

Battle for Ground Zero: Inside the Political Struggle to Rebuild the World Trade Center

“Elizabeth Greenspan, an urban anthropologist, vividly recounts the dysfunctional process and controversies that put her favorite graffiti, “America the Re-build-iful,” to a grueling test that is only now about to be graded by the public… a valuable and highly accessible primer for everyone who wants to better understand how government works and why it does not.”
— The New York Times

“Greenspan pulls out the best of contemporary history … Her urban ethnography methodology does what so often failed to happen in the hands of idealistic and opportunistic politicians, bureaucrats, and commercial interests – give voice to the people.”
— London School of Economics Review of Books

“Absorbing and illuminating about the tortuous process of deciding what should rise from the ashes of the 16-acre Ground Zero site…Elizabeth Greenspan, an urban anthropologist at Harvard, is not a New Yorker…which helps her remain scrupulously fair-minded…the level of detail is impressive but never overwhelming”
— Sunday Times (London)

“A must-read study of the power of democracy and shared memory to shape our public spaces.”
— Kirkus (Starred Review)

“Elizabeth Greenspan goes digging into the diverse meanings of what we have come to refer to as Ground Zero – 16 acres in downtown Manhattan that defy any formal description. This is a stunning examination of the layered histories that have been collectively made about the site since 2001. Ground Zero is a mutant whose meanings remain unstable, and no Freedom Tower can terminate this ambiguity.”
– Saskia Sassen, Professor of Sociology, Columbia University, and author of Territory, Authority, Rights.

“Elizabeth Greenspan’s compelling narrative introduces readers to the many passionate and clashing voices in the complex history of his volatile, dynamic place. Battle for Ground Zero illustrates just how difficult it is to come to terms with shattering events and site. This is a welcome addition to the literature about 9/11 and its enduring aftermath.”
– Edward Linenthal, author of The Unfinished Bombing: Oklahoma City in American Memory.

[expand title=”Read More” swaptitle=”Close More”]Just after 9/11, Americans came together in a way not seen for generations. As people gave blood, enlisted in the army, and stickered their cars with the flag, they looked to Ground Zero as a rallying symbol, confident that its restoration would prove New York City — and the nation – was stronger than ever. But before rescue workers had even finished clearing the rubble, the site was embroiled in controversy that would plague it for the next ten years – and rob the country of the closure it so desperately sought.

Elizabeth Greenspan has been documenting the events at Ground Zero since the fall of 2001, speaking with scores of neighborhood residents, rescue workers, and victims’ relatives, as well as attending key meetings where the site’s fate was decided. Battle for Ground Zero takes the reader behind the scenes to reveal how grieving families, commercial interests, and politicking bureaucrats have clashed at every turn – from security concerns to the design of the memorial to the role of office space in the rebuilding — confounding progress and infuriating the public. Drawing on unique interviews with key New York players like Governor George Pataki, über-developer Larry Silverstein, Port Authority director Christopher Ward, and master planner Daniel Libeskind, Greenspan provides an unprecedented look at this dysfunctional process, which so often mirrored the complex challenges of the times.

One WTC may again be the tallest building in New York, but Americans will never forget how long it took to get there. In Battle for Ground Zero, Liz Greenspan captures the intervening decade with vital, uncompromising clarity.[/expand] 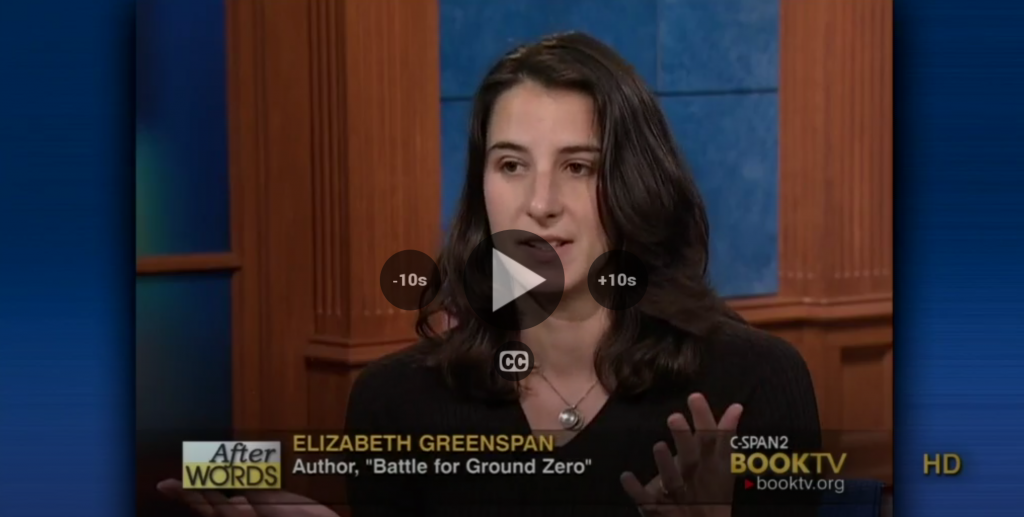